keirain is a servent of Malachi and prominent member in the orginization.

keirain is a rather childish character, as in the fact that he wants to end humanity because he's been through pain caused by humans. he belives that the orginization will bring peace to all the ritious and the survivors.

keirain can use grey magic(betwean white and black magic) to fly and summon monsters. he has special mind dice to do so. the # the dice lands on, the stronger the monster(6=weak & 1 or mind eye=powerfull).

while fighting, he will walk all around the screan, not following its layout. he will, once out of reach, roll his die and randomly summon a monster. once you defeat the monster, he will fall and you can attack him. 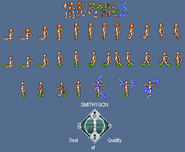 ouija sprite
Add a photo to this gallery
Retrieved from "https://castlevaniafanon.fandom.com/wiki/Keirain?oldid=5978"
Community content is available under CC-BY-SA unless otherwise noted.