Q: Is this game available for PSP and PSVita?

A: Yes, it is. To download, you must become a member in the forum.

Castlevania Dracula LCD Chronicles is an upgrade version from the previous Castlevania LCD Chronicles. The game is only available for SONY PSP version with all previous mode including newly added that was remade by Ericard Production, along with the original developer C++ Program from Damon Caskey, who was the creator of Openbor Engine. The game is announced to be release in 6/6/2014.

Castlevania Dracula LCD Chronicles DX is an upgrade version from the previous Castlevania Dracula LCD Chronicles, DX stands for Deluxe in the title. The game is only available for SONY PSP version with all previous mode with the changes that "Boss Rush Mode" is replaced as Shin Dracula X, able to play with CPU partners in refreshing changes of boss battle, it also remade by Ericard Production. The game is announced to be release in 1/25/2015.

Dracula was revived once more, seeking revenge on humans once again. Only a Belmont could face Dracula known as Richter Belmont. Aljiba Village was attacked by the minions of Dracula and Richter is on way to destroy them carrying a Holy Whip, Silver Dagger, and Cross.

Dogether: Collect as many heart as you can by defeat the bats. Perform the Grand Cross to defeat Dogether at once. Evade the fireballs.

Darkwing: There is two way to defeat Darkwing, jump attack or Cross Throw. Evade the fireballs.

Medusa: Collect the heart by defeat the bats. Use the Cross to defeat Medusa and watch out from the snakes.

Phantom: There are minions of enemy called by Phantom. Defeat the minions and use the dagger to defeat Phantom.

Death: Death perform Sickle toward Richter. Defeat the ghost to collect the heart and use dagger to defeat Death.

Dracula: Perform jump attack or Cross Throw while Dracula appears nearby. Use the cross to Defeat Dracula's Almighty Form.

Simon Belmont defeated Dracula from the previous Castlevania. But, Simon's curse cannot be lifted in any other ways except that he must revive Dracula and defeat him once again. Simon Belmont searches for Dracula's relics and uses flame whip, and silver dagger to defeat any creature who stands in his way...

Dracula: While confronting Dracula's resurrections, attack Dracula. Then perform your defensive. When Dracula was blinking, whip are no longer effective. And so, use the dagger to defeat Dracula.

Castlevania: Symphony of The Night

After the event of Dracula X, Richter Belmont was destroyed the Castlevania and yet, it returned after a few years. Castlevania once more resurrected by the Dark Priest Shaft. However, deep in the coffin lies the returning son of the Dracula named Alucard who was once alongside with Trevor Belmont in defeat Dracula. Alucard, awake from his eternal slumber and cries for the innocent.

Ability: Short Sword, and equip other weapons after defeating bosses.

Hippogryph: Evade from Hippogryph’s fireball and defensive over the minions. Attack on Hippogryph by perform jump attack or Axe Throw.

Succubus: Away from Succubus’ projectile and beware of the flying bats. Succubus can only be defeat by perform Dagger Throw while in the air.

Dracula: The most strongest boss in the game. To beat Dracula you must defensive on Dracula’s fireballs, skull head, Medusa Head, and Bat. Perform the Sword attack while Dracula’s Skelehead launch near Alucard, uses the Axe Throw while Dracula’s Skelehead launch from the air. When defeat Dracula, his true self appears and Dracula are no longer receive any damage. Pick the cross, and use it to defeat Dracula while there is a chance.

Jewel Sword: The shinning blade that can be wields after Medusa was defeated. The power of the blade is double from the previous Short Sword.

Axe: While the enemy comes nearby from the air, Axe Throw can be easily counter. Can be said useful to aim on Dracula’s Skelehead.

Knife: Knife is the best use on long range enemies. Perform the Knife Throw while in the air and aim on flying bats, or Succubus.

Cross: Cross is the most powerful weapon overall the other equipment. It can be found while Dracula’s true self appears, use the Cross and unleash the attack.

This is the mode where players can experience the arts and other images that was used for the game. Beat all the 3 games to unlock gallery mode.

Update from the previous versions

The return of the Belmont

Boss rush instantly removed without a doubt, Shin Dracula X (1800 - the timeline after SOTN) is the successor of brand new mode in storyline. Player control as Morris Baldwin team up with William Graves in the mission to rescue the last Belmont that held in Dracula's Castle. Dracula's 3rd form is added with more difficulty challenging in the last battle.

Leon Belmont Returns is replaced in Demon Castle War. This is the epic story of Julius Belmont and Genya Arikado in the quest that connect the line before Aria of Sorrow, not mention it's from Konami but still involve in fan base...

The first secret mode ever, you're able to load and continue the game everytime you ended. It's a masterpiece version from all Simon Belmont in Castlevania 2D universe. (Unlock by beat Julius Belmont Story Mode)

The most co-op mode ever, you're able to load and continue the game everytime you ended. Play as Trevor Belmont to crossover from all main character in Castlevania Dracula LCD Chronicles DX. (Unlock by beat Ninja Gaiden Story Mode)

Discover the hidden chapter from the original Circle of The Moon timeline, experience in the adventure playable as Nathan Graves and co-op with the Baldwin family.

Listen to your choice of songs from the Dracula LCD Chronicles DX.

Leveling Up available in SOTN style 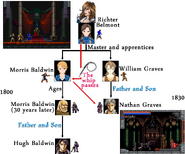 Add a photo to this gallery
Retrieved from "https://castlevaniafanon.fandom.com/wiki/Castlevania_LCD_Chronicles(1-bit_handheld)?oldid=6982"
Community content is available under CC-BY-SA unless otherwise noted.